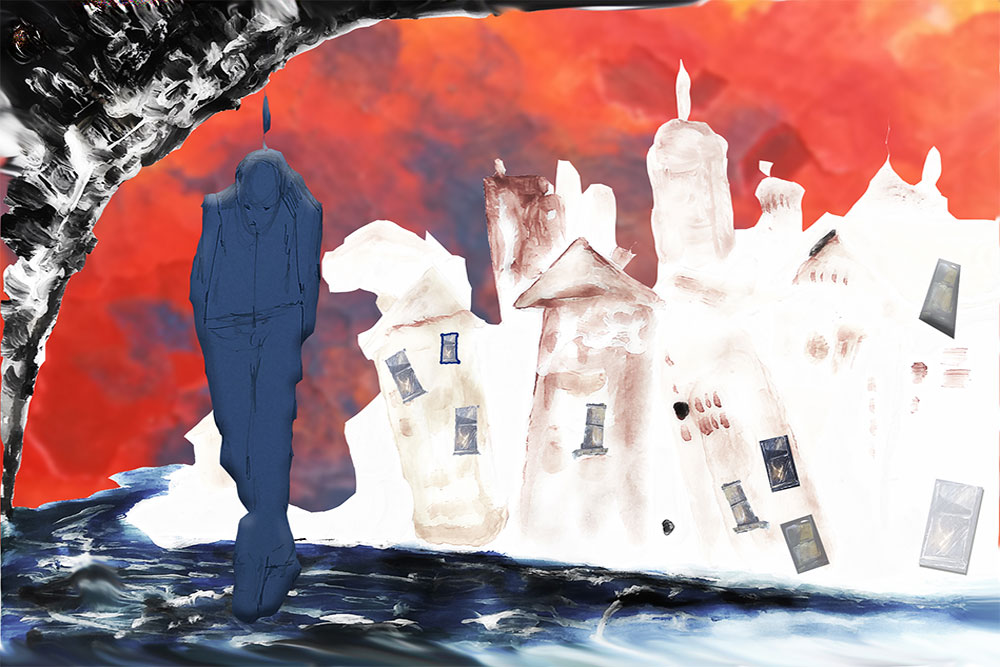 The Invisible Naked City, or, The Dirty Story I Wish Calvino Had Written

This week's story by Greta Christina packs an astounding level of detail into a very short piece. As is suggested by the subtitle, Christina plays with Calvino's exploration of the human condition, taking it to the next level as she deftly captures the elusive search for happiness driven by the many forms of desire. The gritty, honest way she writes about sex is at once satisfying and disturbing. (Please note that this piece contains graphic sexual content.)

Traveling south, you arrive at the city of Sex. Your road into the city is lined with cypress trees, their branches weaving together in a fragrant tunnel over your head; the ground is soft beneath your feet. Your road converges with others, thousands of them, and on your way to the marketplace you talk with the other travelers about how they arrived: the boulevard lit with hanging lanterns, the narrow trail through the forest, the caravan of traders and traveling musicians, the shimmering red bridge, the tunnel they clawed from out of the prison.

In the marketplace there are storytellers on every corner. Cut velvet is sold there, and rhinestones, and old photographs, and spices of every variety: cardamom, sweet basil, anise, vanilla, pepper in white and red and black. The spice vendors make proprietary blends, and argue hotly over them. Nothing essential is sold in the city: you can find spun sugar here, and chocolates dusted with gold, but must go elsewhere for bread. And yet its visitors find themselves sickening, withering, without the perfume they find here; the jeweled sandals; the jeweled collar; the mulled wine; the crimson sash embroidered with silver thread; the blend of spices from their favored vendor, the one under the silk canopy of cobalt blue. Even the absence of hunger is hunger here, and travelers drug themselves with pastilles and creams, not to stave off hunger, but to spark it. They will save their earnings for months for a visit to the city, and go without bread, and consider it a bargain.

Here is what you need to know about the city: it is inhabited entirely by its visitors. There are no permanent residents: even its most devoted disciples, even the vendors and storytellers who earn their wages there, still leave the city to bank their money, to visit the doctor, to sleep. Travelers arrive alone, and in pairs, and in groups, and settle in to build their homes for the night. They build sylvan retreats, throne rooms, torture chambers, treehouses, beach houses, luxury hotels, exact replicas of their homes outside the city but with softer light. They carefully paint the walls: red, or hospital white, or black with silver moldings, or ombré shadings in the colors of the evening sky. Or they line the rooms with mirrors, or paper them with photographs purchased in the marketplace, or drape them with scented fabric stolen from a spice vendor's canopy.

The houses never turn out as expected. There are awkward corners, unexpected shadows, rooms with no doors, rooms with doors in all the walls, a wine cellar the builders have no memory of building, a solarium that smells like a toilet in a public park. On the rare occasions when the house precisely matches the blueprints, it still seems wrong. The happiest people in the city are the ones who carefully prepare, and build, and then watch for the unexpected spaces.

They build; and they decorate; and then they copulate, or masturbate, or enact complicated stage shows for an audience of themselves. A woman in a scarlet cape steps into a boudoir and beckons her lover, an older woman in a corset embroidered with peacocks; their eyes drift to the cash on the nightstand, counterfeit bills they made themselves. A man in calfskin boots backs into a corner of a laundry room and kneels at the feet of his friend, a bearded man he calls Father, a man who slaps his face and jerks off into his open mouth and reads to him from Leviticus. A woman spends hours decking a loft with pillows and comforters and featherbeds of soft white and grey, then slips off to the bathroom to pee, and ends up disporting herself in a grimy bathtub, grinding her back against the porcelain, crying out as her genitals slide under the faucet. A man masturbates furtively in an outhouse, then spends the rest of the evening building a villa around it, smearing his ejaculate on the walls of every room, finally climbing to the roof and masturbating one more time over the balustrade as the sun rises. A naked woman in a sterile hotel room places herself in a window overlooking the city, her hands gripping the window frame, a dirty rag in her mouth, while a man in a white mask stands behind her and beats her: she collapses onto the floor, then staggers back to her feet, and puts herself back in place.

All around the city they finish, and they lie in bliss together, quiet, drugged, limbs draped over one another, or they lie in bliss alone, one hand resting quietly on their genitals, as the houses softly collapse around them, the drywall turning to fabric and collapsing onto their bodies, the fabric turning to dust and settling on their skin. The lucky ones, the ones with open pores or open mouths, let the dust sink in. After years, their bones will be made of it, and the coroner will marvel at the skeletons with the streaks of violet and red and metallic dust.

Returning travelers will often re-build in the same places. Their houses are never the same, but over the years, the dust from the collapse of hundreds of buildings begins to form a hillock; a more solid place to build, or at least a more familiar one. These piles of dust are what give the city its shape: viewing it from a distance through a telescope, an explorer would see rolling hills like sand dunes, the houses rising and falling, blossoming on the hills like night-blooming jasmine and fading with the rising sun.

There is disappointment in the city, and anger, and fear. The day you arrive, divorce lawyers are distributing flyers in the marketplace; that night, there are fights in the taverns, and a murder, and in the morning a suicide is discovered hanging from a bridge. And yet the city is famous, and travelers flock there from around the world; in helicopters, in taxis, on subway trains, on their hands and knees. Miles away, leaving the city to bank their money and visit the doctor and sleep, the luckiest visitors find a stone in their shoe: a rhinestone, a ruby, a shard of glass from a broken mirror, a peppercorn, scratching at their foot, chafing always in the same raw spot, reminding them to return.