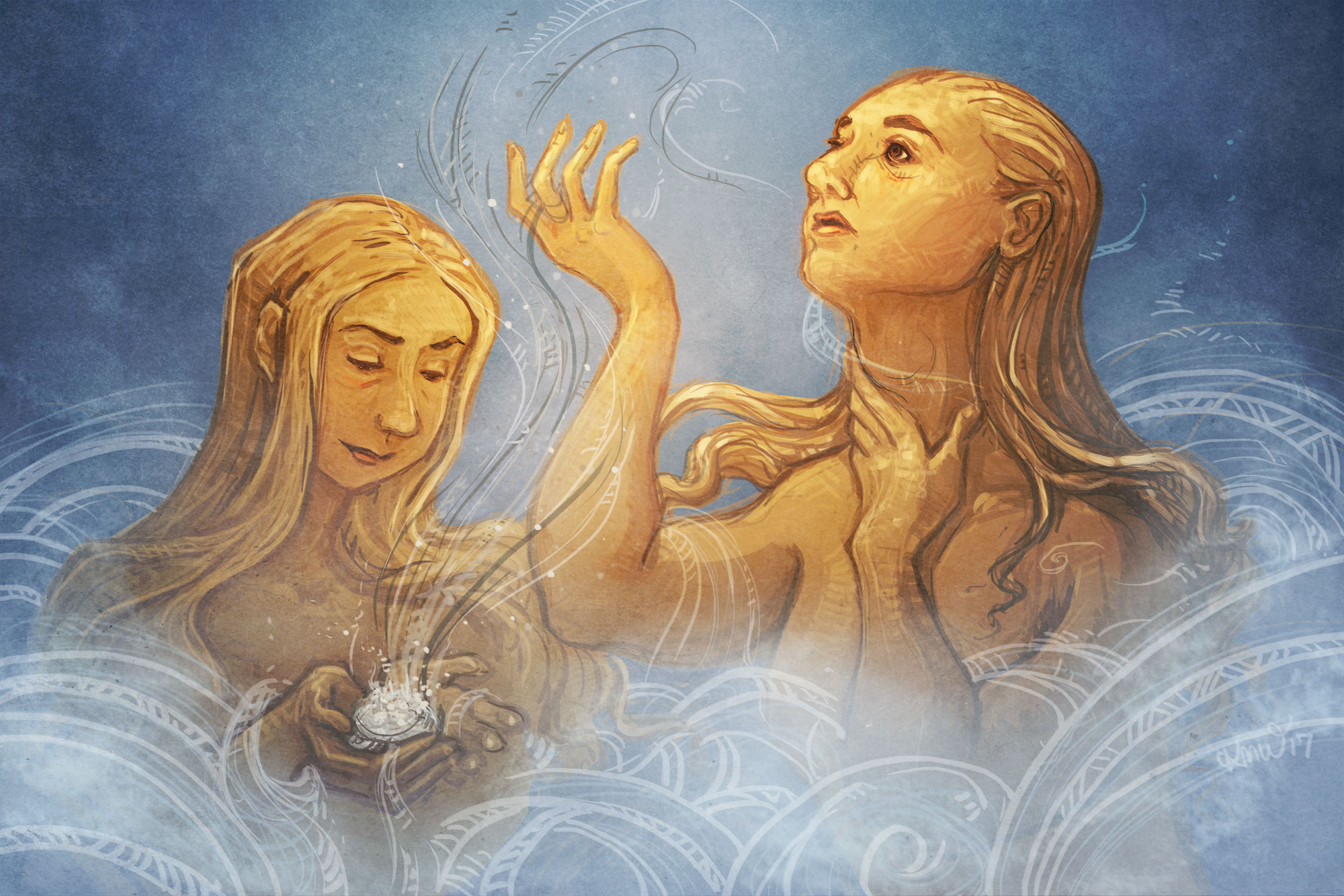 Into a Bloody Susurrus

Most women can tell you about the way some men drain their energy. Langley Hyde uses a fantasy setting to make this drain literal in “Into a Bloody Susurrus”. Women have always found subtle ways to resist, to use our experience to mitigate or, if we’re lucky, escape bad situations, and the narrator of this piece is no exception.

You won’t believe me.

If you insist. From the beginning?

At first I thought he wanted me for my body, the man with a handlebar mustache in a red wool plush uniform, each button burnished with such care that he had to have secrets. Gaunt-cheeked, eyes dark with hunger, he beheld me and said, I like your dress. At sixteen I knew that for code. Water bucket at the wellspring near my feet, I didn’t run, because my mother had taught me that wolves thrill at the chase. I didn’t speak, but let the boughs overhead fill the silence, each red leaf lit like stained glass, rubbing each other into a bloody susurrus. He removed folded papers from his pocket, held them out as if that would draw me closer. Your mother sold you to me. I told him she couldn’t do that to a person. You’re not a person, he said. You’re manna. When I accepted the papers, that’s when it began.

Because you can choose when to wake and when to sleep, what to eat and how to dress, who you love, and where you go.

Certainly he gave me every courtesy. But you do not treat your milch cow like a daughter, do you?

That’s what I thought.

At first I didn’t know what exhaustion dragged at my limbs, because I didn’t know what being manna meant, and no one had told the other manna either. We languished, a sexless yet debauched harem, powdered gold sticking to our sweat-moistened skin, the heat of the baths wafting over us the rankness of uneaten meat. Stink swathed sage green columns. When I could summon the vivacity, I explored the tower from boiler room to observatory, casement to casement. When I discovered the library, I honed my mind on books.

I looked up what manna meant in a dictionary. To him I was a feast that regenerated daily. He ate the magic from my heart, needing the nearness of my proximity in his hoard.

He only touched me once. I stitched a dress out of a forest green damask curtain, with a keyhole neckline. He slapped me for wearing clothes. Anything but silk interfered with his devouring.

We did not need to be bound. Our weariness shackled us. I tried to escape once, though, before I met Mina. I only got as far as the walls, where barbed vines lashed out around my ankles. Constricting around me like snakes, they stole my power. As they strengthened, I weakened until he released me, returned me to his collection.

I met Mina at a party.

He hosted it every year, twelve days after winter solstice, when the world glittered with snow and ice. That year, he bloomed roses bright as flaming suns up his tower. Stars glossed the sky. Air cut dry as shattered glass. Horses, coal black, snorted dragonish puffs and pulled each carriage up to the tower’s arched front door. Senators and kings, weighty with cloth-of-gold and self-importance, disembarked and paraded inside. In the tower, the breasts of half-naked warrior queens shone like polished shields. Philosophers canoodled behind merlot fountains, tangling arguments and limbs. Artists clasped their paint-daubed hands and drifted in unmoored shadows. His chief rival—yes, we’re talking about the man in red again—his rival billowed out from an uncanny phaeton. A defensive cloud hissed and spat out insults whenever an inadvertent parliamentarian brushed it. Mina attended as the rival’s secretary, but we all knew what she meant to him.

Stealing another’s manna is rather like sneaking oysters off a neighbor’s dinner plate.

I didn’t know about the war. Wars.

I leaned on a column. Better to be a copper cathode than a girl. He’d insisted on his manna’s nudity so we’d painted ourselves with ornate fleurons until our skins seemed sewn into a tight brocade. Smears hugged my hip from when a king had said, I have not heard the word no in longer than you’ve walked Kartha’s earth. If I clung close to the man in red, persistent kings backed away and corrupt politicians blossomed with innocence. That’s why I witnessed it so closely, when he won Mina.

I don’t say his name out of habit. He could hear his name thought as well as spoken.

His rival stormed up to him, dressed in such heavy clouds that only a finger peeked out, a tip of his nose, the back of his heel, when he moved too swiftly for the suspended droplets to catch up. I didn’t hear the snipe cut through the air. His rival’s anger seared into lightning, and ozone demolished the fragrance of roses. As for him, he increased the heat of his body until, white hot, he burned the water away. The drapes flamed up. I dragged Mina—I didn’t know her then, but she seemed so dazed—outside onto the crackling grass. Four kings died in the conflagration, as did one prince, and no one counted the politicians. The two rivals launched themselves into the sky, bursting from their skins through the tower’s roof to hiss and snap midair. Wings blotted the stars. Half of Sarnor burned that night. Even I could see the flames, drained insensible with crushing tiredness.

Minna cried when he said he owned her. Later I learned Mina cried only when she was angry.

Because Mina had more than the rest of us, his work hit her harder. Or perhaps he fed on her more unabashedly, finding her especially delicious. When he turned the grass to emeralds, she vomited. His transformations burst the blood vessels in her skin and the whites of her eyes. Once he created a quail supper from a snatch of song and her lungs clasped shut. I held her trembling body while she labored for every gasp, stroking her back, knowing I could not protect her from him. Not yet.

We trysted in the library, the close confines of the overstacked shelves. Once we toppled one. Books dug into my spine. Only an inch taller than me, her breasts pressed into mine, her leg between mine. Our exertions had washed away our gold. Clean and sticky, we began to laugh, and that’s when he found us.

He stopped feeding us until we swore we would not consume each other, that we would leave our vigor solely to him. Other manna feared to sneak us even tidbits, that in his wrath he would starve us all against his better interest. Mina and I gave in. Or at least seemed to. We did not need to conspire any more than two hands must in order to steeple. We spoke with the chemistry of touch. We expressed glances. Intimacy gifted us a language of movement intelligible only to us.

Because he preferred virgins. More experienced women knew better how to resist him. This gave him indigestion. One time I struggled enough that he started hiccupping during a duel with Haftor’s dragon.

Why should I care which one owns what country? Our lands are territories to them, not nations, and we certainly aren’t equals to them, if you haven’t noticed.

You can tell me how many died if it will make you feel better.

You’re right. That is a lot.

We found our weapon in a chemistry book. We had gold on our skin, but we needed silver. Gold parting, usually used to purify gold of its impure elements, provided an answer. We considered the antimony method, as he kept some for the manna that wished to leave his service, but ultimately we decided on salt cementation so as not to rouse his curiosity.

We used our powder thinly as we could, accumulating dust in secret caches, boring holes into the hollow feet of cast-bronze statues to hide our gains.

He shouldn’t have liked such pretty things.

When we had enough, we sneaked down to the boiler room beneath the baths. We added in our saved table salt, clay dust from priceless plates, and other secret substances. Heat steamed the silver nitrate out from the gold, and we melted that down into pure silver. We sharpened the blade until it its edge gleamed thinner than a missing woman’s hair.

If I knew where Mina was, I wouldn’t tell you. Even though I don’t know where she is, Mina knows where I am. You should be worried, you know.

I told you that you wouldn’t believe me.